Don't Use Your Head! 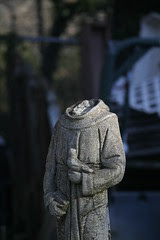 This is a gentle reminder for those Christians who may have happened upon this heathen web site by accident or out of curiosity. My message is simple, don’t use your head if you want to keep your faith. Whatever you do, don’t let these people make you think about it. As you and I know, salvation can only be yours through Christ, and the Bible is very clear on this.

When asked, "What must I do to be saved?" the apostles answered, "Believe on the Lord Jesus Christ and you shall be saved" (Acts 16:31).

The Bible, in its wisdom, tells us exactly what to think, and then instructs us very clearly not to use our heads on such matters. As Proverbs 3:5 says, "Lean not on your own understanding.” True, the claim that Jesus was dead for two or three days and then just stood up and walked away can be hard to accept sometimes, but you can’t let that interfere with your faith. Clearly, faith is all about how much of the improbable you can swallow. You mustn’t ever let thinking lead you astray. As John says (20:29), “Blessed are those who have not seen and yet believe.”

Don’t use your head if you want to keep your faith. When your faith becomes a struggle, remember the inspiring and instructive words of the White Queen in “Through the Looking Glass.” When the Queen and Alice talk about belief, Alice says she can’t believe in impossible things. The wise Queen replies,

“I dare say you haven’t had much practice. When I was your age,I always did it for half-an-hour a day. Why, sometimes I’ve believed as many as six impossible things before breakfast.”

Your faith brings you many gifts of the spirit and great powers. Remember that Jesus says that if you have faith and do not doubt, then you can command the mountain to throw itself into the sea and it will be done. You don’t want to lose that power, do you - by questioning your faith?

Yes, of course the Resurrection is difficult to believe in if you really think about it. One might argue that the magicians’ trick of sawing the woman in half right before your eyes and Jesus’ trick of waking from the dead seem pretty similar. And, true, people sometimes see things that aren’t there, or don’t see things that are there. After all, in all the experience of our entire lives, truly dead people stay dead. But as the Bible says, “Who you gonna believe, me or your own eyes?” Actually, that was Groucho Marx, but the Bible clearly implies the same message… if we will but listen.

And besides, didn’t Paul write that 500 people saw the resurrected Jesus with their own eyes? Now you don’t really need to think about the fact that this was just this one man’s claim and therefore doesn’t really have the strength of 500 eye witnesses. And the fact that none of the 500 ever wrote about it can be simply explained by the fact that most people were illiterate in those days.

When these questions about the Resurrection and such become troubling, you can always tell yourself that the Lord works in mysterious ways. Think about it; if god created human intelligence but doesn’t want us to use it to confirm his existence, then that is mysterious isn’t it? Case closed!

When I was a child, my mother was forever telling me, “Use your head for something besides a hat rack!” While her simple homilies always struck me as uncommonly wise and practical, despite her lack of education, I eventually had to face up to the fact that mother was never ordained.

Your faith is the most precious thing you have, isn’t it? It certainly is more valuable than evidence, or knowledge, or truth, right? And if people hassle you about this, then you can just say to them, “Don’t confuse me with the facts, my mind’s made up.” Don’t let them shake your faith. You must always remember the clear message of the Bible that faith comes first, last, and always, and the way of faith is simple; DON’T USE YOUR HEAD!

at Wednesday, December 30, 2009
Email ThisBlogThis!Share to TwitterShare to FacebookShare to Pinterest

Wonderful! I love this article and all of its snazzy sarcasm. I had to quote it on facebook!

Now all we need some trolls on here to accuse you of taking verses out of context.

I love Dan Barker's testimony, if he can deconvert anyone can . . . hopefully!

If You Want to Keep Your Faith

If you want to keep your faith, don’t think.
By grace are you saved, through faith:
Your thoughts will only confuse: don’t blink
But heed the bible and what the lord saith.

Your wide-eyed innocence is called for:
Don’t develop a questioning stance,
Pray for the lord to knock on your door.
With open heart give grace entrance.

The devil’s in the details of reason
Avoid analysis and critical thought:
They’ll give you an anguished season
Of separation from god, a sad lot.

On your own understanding lean not
A thought on your blank slate’s a blot.

"Truth does not demand belief. Scientists do not join hands every Sunday, singing, "Yes, gravity is real ! I will have faith! I will be strong! I believe in my heart yhat what goes up, up, up must come down, down, down. Amen!" If they did, we would think they were pretty insecure about it."

WizenedSage, No where in the bible does it pay homage to intellect. Those flaky authors didn't want the reader to think, only to be in awe and to knuckle under. Interesting post W S, and it brought up a lot of good points to ponder.

Probably why I never really understood it- I "think too much". lol

Good luck with that. It's all they've got.

"Faith is believing what you know ain't so." Mark Twain

I've often wondered if the word faith..this belief in what you can't see and what you can't prove..should be eliminated from the English language,
at least in its religious form.

Faith..when it comes to Xianity, never has a word promised so much
and delivered so little.

Again, kudos to our Wizened friend for another fine article.

Beautiful. You are truly wise oh wizened one.

An interesting point. Especially in light of a debate I just watched between Dan Barker and Dinesh D'Ooza. Dinesh was very much using his head to try and give logical and scientific arguments. But the very definition of faith is belief in something without evidence. And if you're trying to have a debate defending your faith, you not only don't have to use evidence, but you can't, otherwise it isn't faith you're promoting. To me it seems to be an impossible position to debate from since you don't/can't support any premises that you make.

you can always tell yourself that the Lord works in mysterious ways. Think about it; if god created human intelligence but doesn’t want us to use it to confirm his existence, then that is mysterious isn’t it? Case closed!

...the conundrum of Faith itself. How can you have Faith without reason? As if God just tossed us all into this world saying, "Alright, I have a plan for you and mankind, etc. You won't ever really know what my plan is, but it's for the best and ultimately all for My Glory, ok? According to my 'Word." If God exists and the Bible is true then I believe God is insane. What a burden of nonsense.