Mythology is Mythology. Pass the Eggnog. 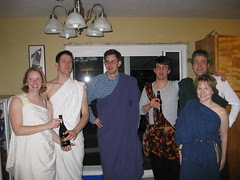 I hope you don’t define yourself by atheism. Not only is it not fair to define your person by something you don’t have (theism), is lets Christians define you. Especially this time of year.

When we evaluate if and how we celebrate the holiday season with any regard to Jesus or to Christians, we're sanctioning the Christians’ idea that they own December. If we define our lives by their mythology, Bill O’Reilly has every right and quite possibly some reason to assume we’re jealous of their Baby Jesus.

Christians think they own December because in 350 the pope declared December 25 was Jesus’ birthday and co-opted the existing pagan feasts and celebrations. But adding Christian mythology to pagan mythology doesn’t change the fact that it’s all mythology. Virtually every aspect of the American holiday celebration—the trees, the word Yule and its log, feasting and gluttony, gift giving, caroling, candle lighting, and even Christmas hams—is a pagan branch into which Jesus myths have been engrafted.

If Saturnalia or Isis wouldn’t stop you from enjoying December’s festivities, neither should Jesus.In fact, the only difference between pagan and Christian mythology is that otherwise respectable people continue to believe it.

When atheists respond to the mythology beyond dismissal, we fuel the idea that those people believe in someone that we've rejected, rather than reflecting reality: They believe in mythology that we’ve dismissed.

If Saturnalia or Isis wouldn’t stop you from enjoying December’s festivities, neither should Jesus.

I know that the United States is a cultic culture, and Jesus has more sway than Saturnalia, but that’s not the point. The point is that when you give that culture influence over your behavior, you’re empowering it. Enjoying the holiday fun and explaining you’ve no more regard for Jesus myths than the pagan myths his followers have adopted dis-empowers it.

Related articles:
Christmas Unwrapped -- the history of Christmas | Ho Ho Ho -- Merry Christmas Happy Yuletide Cheer | Is it Ok to Celebrate Christmas, Even If You’re Not a Christian?

at Monday, December 21, 2009
Email ThisBlogThis!Share to TwitterShare to FacebookShare to Pinterest

quote:
" I don't mind the "merry christmas" thing either nor do I think everybody who says it or participates in it is a Christian."

The holiday cliche "merry christmas" has taken on a secular meaning. It is extremely ridiculous for anyone to get offended because they aren't Christian.

My pleasure! PZ Myers (superatheist and professor of biology) was the one who introduced it to me!

And I bought it from iTunes the second I could!

This means you have taken "a turn". Not, I hope, for the worse!

AP: "I hope you don’t define yourself by atheism."

AP, thanks for the thought provoking article; I agree, Atheism is logically sound only as a secondary effect by either ideology/philosophy, or by a defaulted biological state.

Also, I'd never define my self by my primary philosophical position, in sum, I'm more than my philosophy.

However, when I am in intelligent company, and asked for my POV, I do suggest that I approach life with a naturalist lens, and the more educated understand the secondary effects of that implication.

AP: "But adding Christian mythology to pagan mythology doesn’t change the fact that it’s all mythology."

Jeremiah 10:3 - "For the customs of the people are vain: for one cutteth a tree out of the forest, the work of the hands of the workman, with the axe. 10:4 They deck it with silver and with gold; they fasten it with nails and with hammers, that it move not."

The xtian bible speaks against the pagan ritual of setting up a celebration tree, yet, all xtians I know are compulsive tree collectors this time of year.

I think, history shows us that many traditions have been hijacked by those wanting to own and control celebratory rights.

Just as xtians dismiss celebratory rights to the pagans, so should everyone else dismiss xtian claims to celebratory rights... if only on the basic principle, that celebrations are host defined exercises of joy/gratitude...

Xtianity, does not rate a privileged position to dictate my joy/gratitude - nor do they rate an explanation for my dismissal of their authority on the matter.

The use of the word Christmas/Christ's Mass or Holiday/Holy-Day can be a concern for those who attempt to exchange an idea/meaning... without disrespect.

Well reasoned people, will understand and recognize the truth of the situation, and accommodate appropriately, its called maturity...

However, neutral greetings to those who are hyper-sensitive to their perceived right to celebratory ownership and recognition of that authority will ultimately be offended no matter the approach.

I tend to stay as far away as possible, from those who feel entitled to dictate the terms of my celebratory period...

Again, thanks for the article, and...

Here is a useless fact for you.

The X in Xmas is actually a substitute for the first letter on Christ in the Greek Language. X or Chi, which is pronounced like "ch". I learned that in My Bable College Greek class!

I had be perfectly acceptable substitute for shortening Christmas . . . until some dumb-ass christian fundamental got offended and thought there was a great Atheist conspiracy to erase the Christ from their blessed holiday!

I think that most Christians to this day probably have very little knowledge of the history of celebrations during the winter solstice. Honestly they would probably not even believe us if we told them!

Thanks so much for posting the link to that xmas song. It's the perfect xmas song for us non-religious folks. (Plus if you buy this song thru iTunes, 50% of December proceeds goes to autism research.)

I love the spirit of Christmas. We have a tree and the lights and I love the fun carols and the cookies too. It hasn't been about Jesus for many years for us. I thought I would feel bad this Christmas and not want to celebrate, but I'm not finding that. I'm enjoying the season and making it my own...a time of celebration of life and family and a time to think positive thoughts and consider peace. I don't mind the "merry christmas" thing either nor do I think everybody who says it or participates in it is a Christian. I've found that out this year after talking to several non-religious people who enjoy celebrating Christmas.

That verse in Jeremiah is definitely my favorite in the bible to drag out at Xmas time. I really like shocking people when i admire their Xmas tree and tell them they must not be Xtian since Xmas trees are clearly forbidden in the OT.

Keep the Saturn in Saturnalia!

I don't find it necessary in this World to define myself as an atheist, in fact, most people wouldn't know that I'm an atheist. It doesn't bother me if people know or don't know.

At the same time, I can enjoy Christmas without thinking of the religious aspect of it. To me it's a pause in the year; to be able to reflect on all the good we have in our lives, our loved ones, family, friends, to think of those who have little and be able to do something about it.

Having a hectic business life leaves me with little time to be able to do what I can do at Christmas, when the post Christmas Eve rush ends and I can relax for a few days.

Christmas was originally a Pagan Winter Solstice festival, nothing at all to do with baby Jesus and virgin Mary and angels singing from on high. It was a celebration of life and bounty, one that (aside from the commercialisation) modern humans have turned into joyful spectacles with lights, decorations and the harmless invention of Santa Claus.

I've always loved Christmas, even though I've been an atheist for more than 50 years, I still get as excited as a child. Just no religion in it!

The true origins of Jesus?

You are right Ayhwh on all accounts.

Cookies and fudge for all and gifts for the children. I don't have a problem with that. I love to give presents to the kids.

I like christmas a lot too. I even like the hymns/carols (Have you noticed how often christmas carols invoke Satan? Weird.) I am glad that we can celebrate our families and friends at a time of year that desperately needs some garland, lights, and cookies, without all the nonsense of xianity.

I keep Yule and Festivus. Bill Orally can have his "war" on Xmas.
Yes, dammit I said Xmas. Until some graduate of the "Close Cover Before Striking School of Theology and Taxidermy" started this "Crossing Keeryst out of Xmas" malarkey, it was perfectly proper to substitue an "X", or a CROSS for the Name o' Jeebus.

Or Merry Xmas. I use both.

I enjoyed this article. It was concise and informative. When I was an
Xian, not one other Xian in my church or in my family ever told me
how the Winter Solstice was a time of celebration long before Xianity, and
how so many of our Xmas traditions came from other cultures and not
from the Bible. When I was part of a theater group, we presented a
brief secular play for the Holidays, which ended with the cast exclaiming
"Welcome Yule!" Our director (a former Baptist) told us much about
the early traditions of that time of year, and how Xianity added them to
its own celebration.

I believe the pope who proclaimed Xmas on Dec. 25, 350 was
Julius I. Feel free to correct me if that is wrong.

Christmas itself really has become a secular holiday in this country. Even growing up in a strict fundy home, it was really truly very little about jebus. Most of it was about Santa, Cookies, Carols, PRESENTS, and watching White Christmas.

So for me I enjoy Christmas a ton. Love it. Merry Christmas!

But it is not the Christ Mass anymore. I think in a hundred years or so all the religious underpinnings of the holiday will be erased . . . if there even is Religion in 100 years! (I can dream!)

Great article! I love this line--

"Enjoying the holiday fun and explaining you’ve no more regard for Jesus myths than the pagan myths his followers have adopted dis-empowers it.

and practice it to the best of my ability! ;-)