For the past 10 years, I accumulated so many DVDs I hardly have any time to watch them. It's been over a year since I bought a DVD movie, and with such a backlog of DVDs, I thought I wouldn't buy another one in a long time. The movie "Jesus Camp" came out in 2006 and was shown as an independent film at selected theaters and times, and this January it came out on DVD. After covering footage from Jesus Camp, I decided to buy the Jesus Camp DVD. So how does it rate?

I can't really give a numerical rating, grade, or thumbs up for this kind of movie. It is a reality documentary film that gives the straight details on what happens in these evangelical Christian churches, particularly in the mid-western red states. Jesus Camp provides chilling accounts of brainwashing cult tactics and religious fanaticism on the most moldable population, the young children. For those of you who think these fanatics are safely isolated from your community, Jesus Camp provides a double dose of harsh reality. First, young children are being brainwashed into religious fanaticism. Second, the adult Christian cult leaders have a strong influence ruling over the United States of America. They have direct contact and influence with President George W. Bush, which trickles down to the cabinet, Congress, and the Supreme Court, all the way to your state and local community. 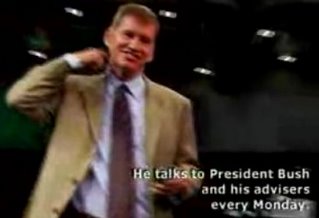 Ted Haggard was featured in the movie. A few months later, he dishonorably resigned for sexual liaisons with a male prostitute and drug abuse.

I would recommend Jesus Camp, which you can rent or buy on DVD. I can imagine Jesus Camp II coming out. In the imaginary sequel I concocted, a few years pass by and the young girls go through their teenage puberty stage. They develop womanly physical characteristics, and their middle aged pastors and counselors develop attractions and start secret sexual liaisons with them. The irony in the end is that the stringent sexual morality laws these religious right fanatics helped pass will be their own downfall, as the adulterating adults are arrested and face decades in prison under the severe anti-pedophilia laws.
at Monday, January 29, 2007
Email ThisBlogThis!Share to TwitterShare to FacebookShare to Pinterest

"The irony in the end is that the stringent sexual morality laws these religious right fanatics helped pass will be their own downfall, as the adulterating adults are arrested and face decades in prison under the severe anti-pedophilia laws."

Not if they indoctrinate the kids sufficiently! lol.

ARGH! This shit is just intensely creepy. I did not know that douchebags like Ted Haggard actually had that much contact with the shrub and co. But, 'birds of a feather flock together', as the old saying goes. Makes me wonder what other fuckbags like ol' Ted corroborate with the "leaders" of this country.

I believe I read in the news that the church that owns the property leased by Jesus Camp promoters refused to let Jesus Camp continue. The meatheads behind JC will fall back for a while, but I don't seriously think we have seen the last of these fanatics. They are absolutely apalling.

So ... was Jesus Camp a movie made FOR or AGAINST christianity. I watch it and can't help but see the negatrive publicity it generates, but these people had to have thought making these movies were benificial to them? We're they duped or are that really that stupid?

I believe Jesus Camp is actually supposed to be a neutral reality documentary. They show the reality of what really goes on behind these religious cults, and the viewers decide themselves if they are too crazy or past their limits.

By watching everyone's expression, the people seem to think they are religious extremists.

I believe that movie was made to promote fundementalism. Can you imagine the guilt and shame those poor kids must go through as their bodies mature, and they start having those normal teenage urges? What a perfect formula to make a kid feel like a total piece of shit.

That was pure comedy gold when they segwayed into Teddy Haggard preaching agaisnt the sins of homosexuality. Little did those boys know Teddy probalby later hopped in his car for a good deep Sunday ass dicking by a hunky bodybuilder.

Nathionally known homophobic preacher getting caught sucking dick, after a heavily promoted documentary is released with him preaching against the sins of homomsexuality.

The movie Jesus Camp is up for an Oscar, I sure hope it doesn't get it.

"The movie Jesus Camp is up for an Oscar, I sure hope it doesn't get it."

Not me; I hope it does. It means many, many more people will get to see these American Taliban (or make that: Talibornagain) madrassas for the dangerous places that they are and these Radical Religious Right lunatics for what they are - a danger to this Republic.

This will be my last "spam" as you call it. I was just trying to be loving with my comments and didn't know it would offend you all. I was saved 20 years ago. i was an alcoholic, bulemic, you name it and i was it. i was a fornicator and hated people. i was dying physically and on my way to hell. i met a christian who told me how to be saved. i went home and asked jesus into my life. he came into my heart and it was changed. peace and joy replaced turmoil and sadness. i started spending alot of time with God, mainly worshipping him and reading the Word. my life changed. but worship has been the key. sometimes i spend hours each day in worship. i love it and god loves it. he is my best friend and the lord of my life. christianity is hard. it is a relationship with god. it takes dedication and determination. but he is worth it. god speaks and god moves in my life. christians will let you down, but god won't. you have to look past christians and look at Jesus. He is faithful. my apologies on behalf of any Christians that have hurt any of you. god loves you. seek him and you will find him. you have the choice. god will never force you to do anything. you can be an atheist if you want. my choice is Jesus. best place to go to church is a vineyard church. they are usually good. god bless you all! and remember, god loves you.

Your "praying" and asking god for forgiveness help or whatever is the same as medatation. Its a natural response your body has. You could have all that with out "god"

worship has been the key. sometimes i spend hours each day in worship. i love it and god loves it.

It's a wonder you have any time left to come and post here. Seriously, what does an invisible being get from watching someone dance around, sing a bunch of hymns, shout hallelujah, wave their arms in the air, speak in tongues, pray for some crap they want..etc, for two hours or more a day?

What would life look like if there were no god?
(Not that we're ever gonna see her again...)

Jesus Camp is a great movie. I made me so angry and sad for those little children.

Let children be children, why burden them with guilt and fear?

"was Jesus Camp a movie made FOR or AGAINST christianity."

I think it depends on your perspective before you watch it.

Fundies will be impressed with how much the kids love Jesus. I'm afraid those little bastards won't hesistate to kill for Jesus.

It's a very good video and I recommend it highly.

I saw some previews online, and I'd really like to see this documentary. However, I live in Louisiana, and it didn't come anywhere NEAR here, unfortunately.

What I saw was scary....these people are absolutely batshit, lemme tell you...these are the people who are trying to make us into a friggin' theocracy.

Shades of the Handmaid's Tale....

Anyone who thinks that fundamentalist Christians are not a bit of a 'cult' needs to see Jesus Camp. I worked at a fundamentalist TV station for a while as 'just a job' and I felt like a heathen! They are so damned extremist, it's SICK! They are Anti- Gay, anti-abortion, anti-human rights, and somewhat racist war mongering hawks. If you don't believe in their version of the bible, you are on an express train to HELL!

I no longer practice ANY religion!
I'm sick of the hypocrisy!
Freedom FROM religion should be a law, too.

just saw Jesus Camp myself, i appreciate the fact that the movie’s makers let the people interviewed do all the talking... over all, there is some truth in this flick as long as it's taken with a grain (or maybe a bucket) of salt