The Loftus-Wood Debate Reviews Have Just Been Posted! 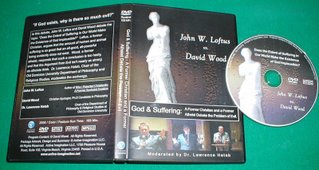 David Wood has just posted both his and my reviews of our debate on evil as featured articles here.

As I read David's review it seems he went beyond merely assessing the debate itself by attempting to answer arguments of mine that he didn't answer that night. I look forward to dealing with these additional arguments of his sometime in the future. For the most part I merely reviewed the arguments that were offered during the debate itself. In neither of our reviews will anyone get a sense of my whole argument as laid out in my opening statement, since I didn't think I needed to repeat it, and David is mainly concentrating on defending his arguments in his review. But for now he has the last word.

For anyone who wants to purchase a copy of the debate itself I have been putting a few on ebay. You can also e-mail me, or contact David to buy it. I can bill you via Paypal. To order through either of us the cost will be $19.95 and we'll pay for 1st Class mail within the US (Otherwise you'll pay the difference).

David and I will probably also appear next Friday (January 12th) at 8PM ET on The Debate Hour to discuss the ideas involved in our debate (to be finalized).

Other reviewers of our debate will be Richard Carrier, Andrea Weisberger, and Jim Lazarus, as they get a chance. These are all atheists, I know, but any Christian theist who would like to review the debate please contact either David or myself. My friend and Christian philosopher Paul Copan was given a copy of it by David, so I'll let you know if and when he may want to write something up about it. Christian philosopher Victor Reppert may do one as well, but I don't think he has a copy yet.
at Monday, January 01, 2007
Email ThisBlogThis!Share to TwitterShare to FacebookShare to Pinterest

Ironicly the word, "livE" spelled backwards is the word "eviL"...

Isa. 45:verse number seven. Tells us that, God created evil! "Behold I form the light, and create darkness, I make peace, and create evil. I the Lord do all these things...

Isa. 46: 9-12). from the beginning to the consummation, all is in God's control, every little detail, every fly every bird is done by His, "GPS" __ Global Positioning System. Man has one, God, his creator has one much superior to His frail impotent creatures...

God is operating all in accord with the counsel of His will! "Not His wish" The Human wishes, God, wills, and performs His will...

1. John 5:19 is speaking of Satan being the evil God of this world

2. Isa 45:7 in context is referring to natural phenomenon

Matthew 7:6 we read: "Give not that which is holy unto the dogs, neither cast your pearls before the swine."

Dogs are performing in accordance to scripture, and dogs are just like god!

Makes about as much sense as your post wouldn’t you say anonymous?

…Also, notice the clever use of “mote” again. (Hint, we’re all supposed to be impressed with their command of the English language!)

Oh, I agree with the conclusion reached by our anonymous poster who is actually Celestials/Koch/S.M.K. or some other obnoxious troll just out to waste its time and ours. "MOTE" means a tiny, insignificant speck of something, such as dust - a very apt description of the insignificant crap it posted. So mote it be.

That's what the NOUN "mote" means, but as it's being used here, it's a verb tense of the auxillary verb might or may. An old, archaic and little used verb tense, but not the same thing at all as the noun.

It's used a lot by Wiccans and pagans.